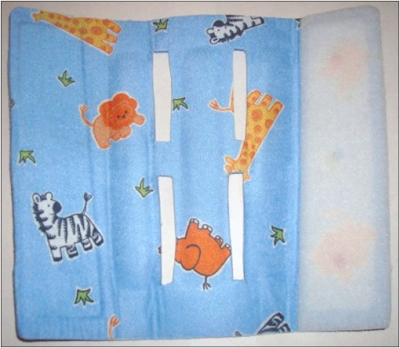 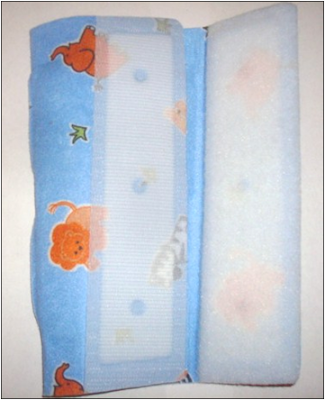 One challenge that we came across quickly and often, was keeping Rykers arms away from his face. There was 4 or 5 times that we were instructed by the doctor to restrain Rykers arms for his own safety. Even for weeks at a time.
The first time we ran into this particular problem, was after our first surgery. At the hospital we were given glorified toilet paper rolls (see above) and told to keep them on Ryker at all times for the next 4 weeks. I listened polity and nodded obediently, all while thinking in my head that these people were deranged. Anyone who has ever had a child, knows someone who has a child, or has seen a child on TV would understand that keeping a baby's arms restrained would be utterly awful, and a bit unrealistic.
Obviously there are extremely important reasons for the restraints. Babys have the tenancy to flail their arms about early on, and later are super prone to putting EVERYTHING in their mouths. Both actions being SUPER dangerous to a freshly healing mouth wound. The little muffins can cause some unintentional, but SERIOUS damage and pain to themselves in the blink of an eye. And after later surgeries, they may even intentionally pull, poke or play with something. Trust me. The last think you need is another "procedure" because your baby's hands got loose and caused some damage.
That being said, there is also what is realistic for you and your family. For us, the first thing we did after we got home from our first surgery was throw away the Velcro toilet paper tubes.

We were blessed to come across two very helpful products. The first being a simply marvelous product for Mamas and babies in general!
It is only the BEST SWADDLING BLANKET EVER!
It's called the Miracle Blanket. Check it out here.
They are awesome for like 96 reasons. One of them being that I could put Ryker in this baby and KNOW he was not going to wiggle out and get his hands free. Plus, he LOVED it! Win, Win! When he slept in it, he always slept better as a whole, and I was relieved to know he was comfy!
Watch how it works here.

The second sanity saving product is the Honeycuff. Seen here.
Watch how it works here.

With this, he could actually move around a bunch without getting in the danger zone. The darling inventor of the Honeycuff is a cleft baby Mommy. She knew there had to be a better way for arm and hand restraints for little ones, so she made her own better way. And I love her for that. She is a local Utah girl and insisted on driving 40 min to hand deliver my Honeycuff, so I wouldn't have to wait for shipping. She will always have a gold star in my book.

With these two fabulous items we sailed through the whole arm restraint thing, as well as you can sail through something like that I guess. But these truly made life a bit easier for us, and I highly recommend them both!

Honestly, I wasn't a freak about keeping some sort of contraption on Ryker at all times after his surgeries. I would let him be "free" a great deal. But at the same time, I would WATCH him and use my rather good common sense to judge when it was okay. I never utilized any kind of arm restraint for the full "recommended " amount of time. I knew my baby and I knew when both he and I were ready to put them back in the box. In fact, the surgery he had for his soft palate repair was right after he learned to crawl. The Doctor told me the standard, "arm restraints for 4 weeks," routine. I listened polity and nodded obediently, and ultimately did NOT ONE day with the restraints. Instead, I was extremely attentive, and took full control of what went in his mouth. Food only. That is what worked for us.

For another perspective on arm restraints, read below.

Are arm restraints worth it? Read this.
Posted by Cassi at 12:35 PM