If your lucky like me you just might get to "Tape" you babys face for a month before the lip repair. All Doctors are different so you just may dodge a bullet. If not, I have a few tips that I would have KILLED for! Enjoy! 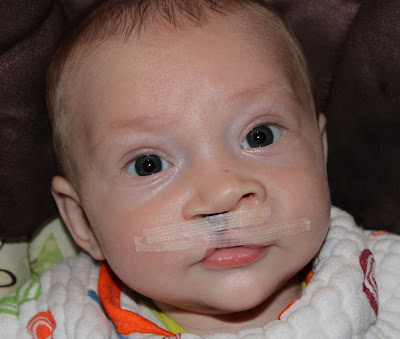 A month before Rykers lip repair the Surgeon sent us home with some medical tape and the instructions to tape Rykers lip together and keep it taped together ALL...THE...TIME.
Let me tell ya, this whole taping thing was a NIGHTMARE!!!
Seriously, AWFUL!!!
The taping is thought to stretch the skin and prepare it to be attached with the best possible results. Fine, but just a few minor problems.
first, babies in general, especially babies with cleft lips, tend to drool, have runny noses, sweat, and so on. All kinds of things wet. Well, wet skin and adhesive do not mix!
Rykers tape would come off about every hour.
So get stronger tape, you might say.
We did.
In fact, we went through 6 different kinds of medical tape before we found one strong enough to hold.
Great! Problem solved!

THAT tape was so strong that it simply would not come off for cleanings or readjusting, and when it did come off, after much pulling, it would leave a rash. Nothing worked good enough to hold for longer then an hour, and still come off relatively easy when needed. We tried EVERYTHING! Both Ryker AND I spent day after day crying our eyes out. It hurt him, it hurt me hurting him....It was Awful.

Then a light bulb went on.
What is the best non-irritating, fast holding, water resistant "tape" for skin?

We took your standard Bandaid, (oversize ones work great too) cut out the gauze piece, and cut the sticky part down the center long way. We rigged the lesser adhesive tape by reinforcing it with the Bandaid tape. "t" style. It worked like a charm! Stayed super well, and came off decently when it needed to. Yeah!!!
This Bandaid "Tape" came in handy later too. For AFTER the lip repair.

So if lip taping is in your future, stock up on good old fashion Bandaids!

Moving on to Ear tubes.
If your little one has a cleft palate, it is EXTREMELY likely that he/she will need ear tubes. Really, NO BIG DEAL.
A lot of kids get them, cleft or no cleft. It is a "no big deal" add on. I strongly recommend setting it up so that the when they do the lip repair surgery, they also put the tubes in at the same time. Most Doctors will work with each others scedual to get this accomplished.
Ryker had been getting so many ear infections, we were THRILLED to finally get them in.
At some point he will most likely grow out of them, but they are a major blessing in the meantime.
Want more detailed Ear Tube info? Go here.
Posted by Cassi at 7:37 PM